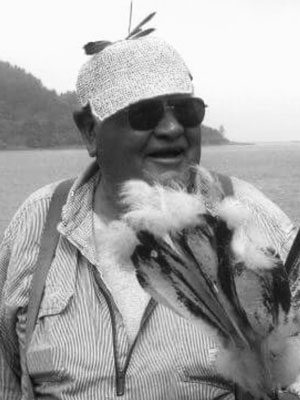 Chapter 9: Across the Lagoon: The Inspiration behind the Northwest Indian Cemetery Protection Association (NICPA)
Chapter 13: Fish Wars on the Klamath River

Walt Lara Sr. (Yurok) is a respected spiritual leader and wisdom keeper of the Yurok tribal people. He is recognized as a Native cultural and political luminary among Tribal Nations throughout the State of California. Walter has dedicated his life to the renaissance of Earth Healing and Earth Renewal Ceremonies and the revitalization of spiritual practices and lifeways of the Yurok People. Mr. Lara is the co-founder of the Northwest Cemetery Protective Association (NICPA), a community-based organization established for the protection of tribal burial sites (cemeteries) and sacred places. NICPA was instrumental in the first repatriation of Yurok human remains and artifacts and the passage of the American Indian Religious Freedom Act in 1978. He was appointed as a commissioner of the Native American Heritage Commission of California. The Commission, through the Office of the State’s Attorney was a key litigant in the infamous landmark case, Lyng v. The Northwest Indian Cemetery Protective Association (NICPA), an American Indian religious freedom case with national precedence. The Heritage Commission, working with California Tribal Nations, was instrumental in the repatriation of human remains and funerary item that were warehoused within the State Parks Department. The Commission also established statutory protection to prevent continued looting and desecration of graves and ceremonial sites. In addition, he served as the chairperson and Area 1 director of the Inter-Tribal Council; a member of the California Rural Indian Health Board’s (CRIHB) traditional health; a member of the California State Native American Graves, Protection, and Repatriation Act (NAGPRA) Commission; and the Smithsonian NAGPRA Advisory Board. Mr. Lara is an honored recipient of numerous awards, including the Society for California’s Archeology’s California Indian Heritage Preservation Award. He is the author of “Blacksnake’s Corner” in the Smoke Signals Journal where he shares historical information that is unique to California. Mr. Lara has worked alongside his wife, Callie and his seven children: Walt Jr., Lorraine, Willie, Liz, Roberta, Keduescha, and Kishan to preserve and protect Indigenous knowledge. He looks forward to the contributions of his 15 grandchildren: Walt III, Kipoon, Jasper, Lucinda, Lau-Lei, Ernie, Chucheesh, Charlene, Mussie Lou, Princess Jintcon, Nijonda, Bronc, Teh-sa’a:n-xwe, Tasahce Se:wenah and Kisdyante as well as his 7 great-grandchildren: Ke:yoh, Moreck, Keech-pooh, Ellie Su, Nickwich, Chereri, and Louis.

Back to Authors Page